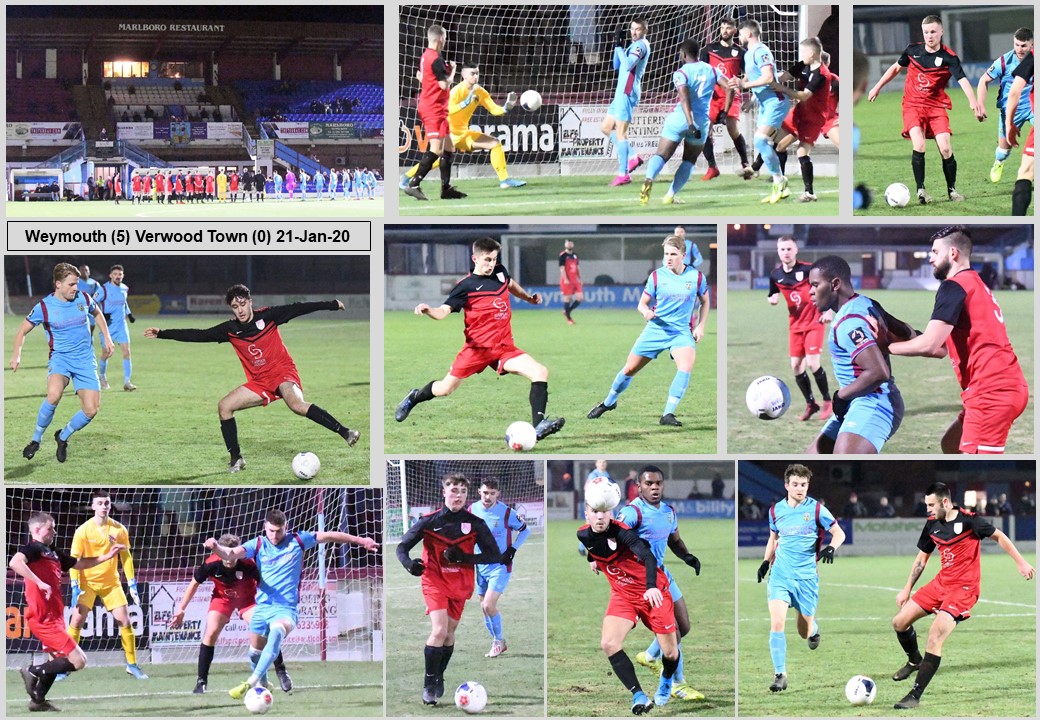 After two attempts to play the Semi-Final of the Dorset Senior Cup at Potterne and failures because of heavy downpours we had a reverse fixture at Weymouth’s Bob Lucas Stadium.

Changes to the squad and formation tested the versatility of those available on the night. Adie Arnold plumped for Josh Hall, Ben Kelly, Charlie Gajic and Martin Smith to make up the back four and Russ Dyer, Ethan Maddocks, Owen Nicholson and Dan Hunt to make up a four man midfield. Lee Vint and Callum Butler shouldered a front two responsibility. On the bench we had Charlie Guy and Elliot Cooper. Dale Hind picked up the gloves.

As we expected, Weymouth pushed on from the whistle. We looked a bit slow at first but picked up pace as the game progressed.

A high ball into the box in the first couple of minutes was plucked out of the air by Hind’s safe hands and then Kelly blocked another cross from the Weymouth flank as the home team swapped attacking options.

Midfield did well to contain an aggressive Weymouth duo and both Dyer and Maddocks absorbed central pressures.

20 minutes gone and Weymouth went one up as a break let them in to the edge of the box. A rasping shot was almost deflected by Hinds but the ball finished up in the top corner. 0-1.

Our back four dug in. Weymouth had to revert to switching options and it took another ten minutes before a gap opened up sufficiently for a cross to creep through and a tap in on the post made it 0-2.

Nicholson, Vint and Butler gave concerns to Weymouth’s defence but with a couple of minutes left they countered and a brilliant effort from the corner of the box made it 0-3.

We were playing better now than we had for the last few games and despite the score line there was a pride in performance.

Maddocks won a wrestling match to steer the ball for a Vint run on goal. Defenders closed in. A clever flick gave Butler a shot and the keeper did well to hold it.

Dan Hunt had been carefully shadowed but wriggled free with 10 minutes gone to hammer a low cross into the area. Defenders cleared.

On 15 minutes Charlie Guy came on for his debut and Dan made way.

Then it was the Dale Hind show as Weymouth increased pressure. We held them at bay for a while but anything that crept through was dealt with by a competent and confident keeper.

Two goals late on finished the scoring and we exited the Dorset Senior Cup.

We offer a big thanks to Weymouth for their courtesy and reception to our Committee, Players and Supporters and wish them every success in the final.