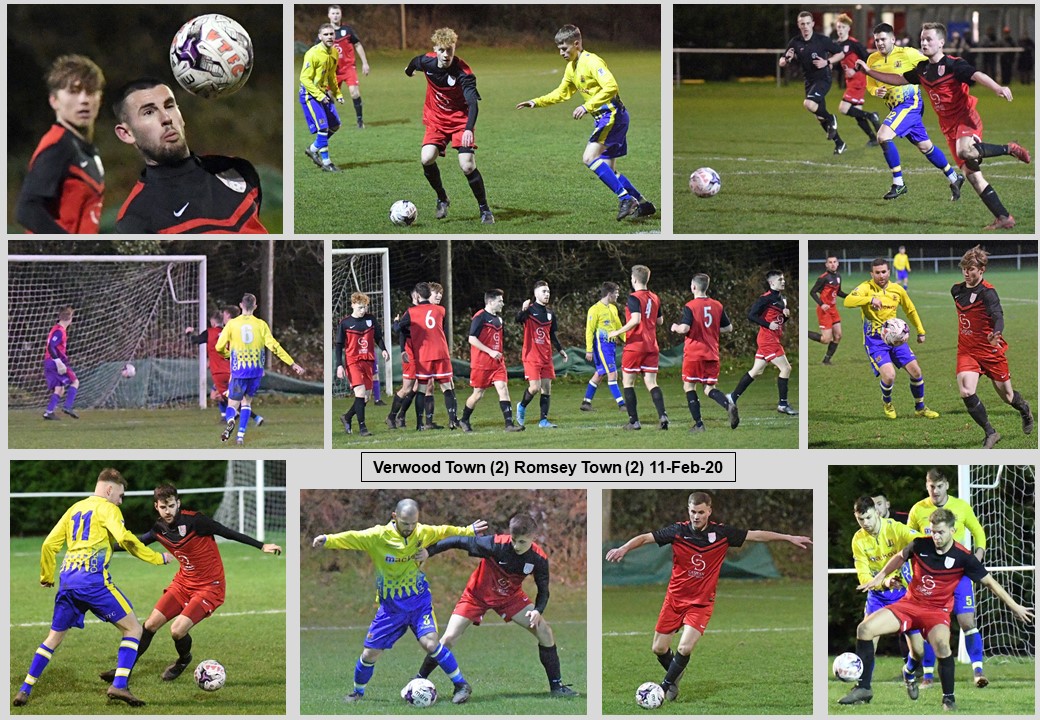 Our passing quality left a lot to be desired in the first half. Poor control and a giveaway with only a few minutes gone allowed Romsey a quick chip over our defence.

Luckily Cooper was alert and a great fingertip save flicked the ball onto the inside of the post and back into play. Hall whipped the ball away from danger.

Romsey continued their pressure earning a free kick on the edge of our area a couple of minutes after Coopers save. The ball this time whistled over the angle of bar and post.

On 9 minutes we managed to string a couple of accurate passes together starting with Dyer. Hall then sent away Vint. Vint cut in from the bye line and slammed a left foot shot on target. The keeper did well to hold it on the post. A long clearance caught us and the immediate counter produced a simple goal putting Romsey ahead. 0-1.

The half progressed with frustration as we failed to dent Romsey’s possession mainly because of our inept quality on the ball.

We had flurries with Taylor and Dyer sparking a few attacks but Romsey easily blocked us in their third.

Defensively Gajic and Smith helped reduce Adie Arnold’s diazepam needs and as the half progressed the Danvers and Hall contribution gave hope for an improvement in fortune. Hope bottomed out though when Cooper tried to oust a Romsey runner off the ball but a narrow angled shot put Romsey at 0-2.

Tails up Romsey knocked the ball around enjoying possession. It was our turn to hit on the counter and Butler slammed a terrific shot past the keeper only to have the ‘goal’ disallowed by a linesman’s flag.

3 minutes left of the half and Vint connected with a cross leaving the keeper stranded 1-2.

What a difference in the second half. We started well, crisp passing and pushing forward. We had a mini fright as a ball cleared from Romsey’s half dropped in space and a runner cut into the box. Smith had spotted the danger and a classic tackle took the ball off toes on the spot.

Maddocks was enjoying himself winning most of the tussles and with Danvers beginning an exceptional 45 minutes we took hold of the game.

Taylor and Dyer worked the middle and Butler took up the running with 16 minutes gone. Vint collected a low ball on the edge of the box and a pass gave Nicholson a half chance. It was enough as Nicholson put the ball past the keeper to make it 2-2.

We were now enjoying a higher percentage of the game. Dyer sparked a Butler break but his effort was blocked on the line and cleared.

A counter from a clearance dropped just outside our area and it took a Maddocks scissor kick to clear danger.

15 minutes left and Hall’s run and cross should have produced the winner but no one was close enough to divert the ball past the keeper.. A high ball from Romsey’s defence dropped for a runner but Gajic picked the pocket. Gajic strode past a midfield setting up Danvers for a cross. Smith had joined the attack and his powerful header hit the bar but bounced clear.

Romsey had a couple of breaks but with our defence well on top and a Cooper pair of safe hands we went for broke.

Nicholson had a volley cleared out of the box before making way for Parslow. 6 minutes left of normal time…. We went for the winner. Vint hit the ball just over the bar and a Danvers cross was headed over the angle. Butler was felled on 45 minutes but Dyer’s free kick went a couple of inches over the bar.

On 45+2 we gave away a free kick. It was a dubious decision but stood. Gajic headed clear sending the ball straight down the pitch and it was our turn to get a free kick. Dyer dropped it in the 6 yard box and a melee developed until the ball was suddenly skied and dropped in touch.

45 + 7 the whistle went on a point each and a fighting Verwood second half we can feel proud of.