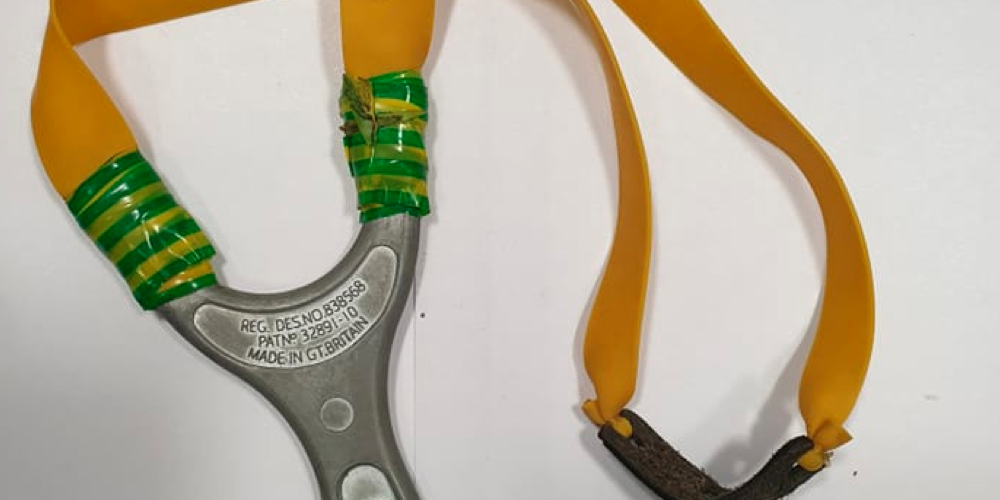 A catapult has been seized by Dorset Police from a young person in Bugdens Copse, Verwood.

It follows several reports of Anti-Social Behaviour in central Verwood by residents.

“They and their accomplice are to be dealt with via the ‘Consequence Scheme’ which is used when a young person comes to notice for their conduct.

A C1 letter is sent to their parents/guardians highlighting behaviours. In the majority of cases, this results in a cessation of further anti-social behaviour (ASB).

If a second incident occurs within 6 months, the young person moves to a C2 and will receive a visit to their home by a member of the local Neighbourhood Policing Team (NPT).

A C3 is issued if ASB persists and this will consist of the NPT Sergeant making contact outlining the fact that an individual’s behaviour is still having a negative impact on the community.

At this stage other partners such as Social Services, Schools/Colleges, Housing Associations will be notified of concerns and the individual will be invited to an Acceptable Behaviour Contract clinic.

At C3, rules are set for the individual to help to encourage a change in behaviour and to prevent more formal action being taken through the criminal justice system. Formal action does however, remain an option throughout the process.

ASB incidents are assessed on individual circumstances and any individual can join this progressive scheme at any consequence level. In some circumstances there will be immediate progression to attending an Acceptable Behaviour Contract Clinic.

This scheme is focused on addressing a specific issue and requesting behaviour change and placing responsibility on the individual. We would much rather address and rehabilitate rather than deal formally through the criminal justice system.”